Many years ago I bought a Current Cost meter. Infact it was so long ago now that they have called my version The Classic. I wanted to see how much electrical energy all my servers, home computers and gadgets were using.

The Current Cost package contains two main parts, a transmitter and the display. The transmitter is hooked around your house/offices main power in BEFORE the consumer meter. The consumer meter is the big box that is usually under your stairs. The meter constantly sends power usage to the display which shows the watts currently being used, watts over time and, with a little bit of input from the user how much your energy usage is going to cost you over time.

The reason I went with a Current Cost meter is becuase it has a serial connection on the bottom of the display unit. One annoyance is that it uses a RJ45 connector so you either need to stump up for a custom cable from Current Cost or make your own (google it, there are a number of sites with pinouts and instructions).

I already monitor pretty much every aspect of my servers using Munin so it seemed like a natural solution for graphing the Current Cost data over time.

Sending data to Munin is fairly easy and it has a simple plugin interface. There are some complexities to it as Munin uses RRDTool to render it’s graphs and the options for RRDTool are complex and confusing. 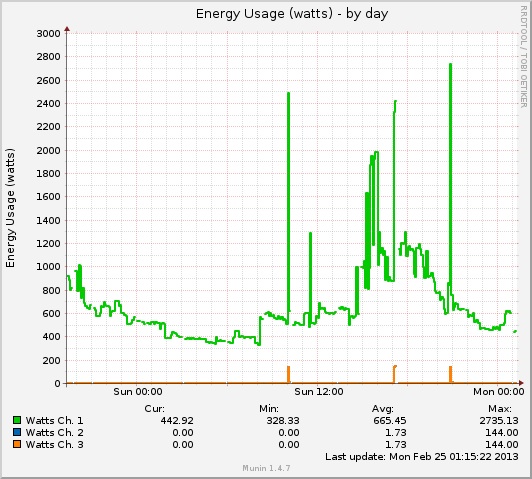 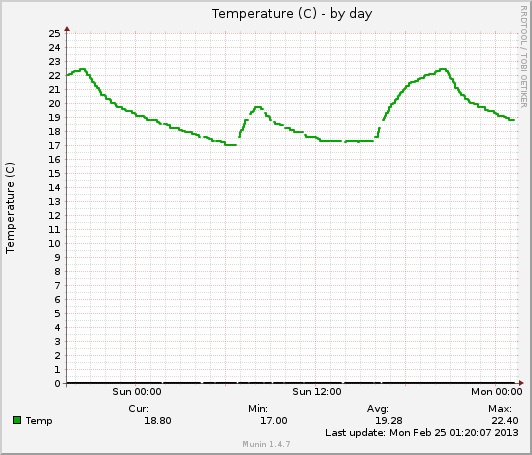 showing temparature at or near the Current Cost display

Now as you can see, through the day we get massive spikes, they are usually boiling water for coffee or cooking.

The most interesting thing for me is that having the data before me modifies my behaviour. For example I finally unplugged my Wii today, 4 months after getting my WiiU. It’s been there quietly sucking up a few kWh per day. It hasn’t cost me a lot but as they always say:

If we all did it we’d save the planet!

That is a direct quote from Al Gore!

There is a lot going on here so I’ll summerise the code:

I hope this helps someone, good luck getting your energy bills down. I wish there was a similar bit of hardware to measure natural gas usage.